Are Aboriginal Taiwanese the ancestors of Polynesians?

I explored this claim during my recent visit to Keelung.

I’ve been traveling with my family for two years around Asia and the Pacific. Learning about history and culture while we travel is always an interesting way to know more about a place. Coming to Taiwan presented me with the opportunity to explore the possibility that our ancestors could have come from Taiwan. The connection between Taiwanese and Polynesians

I’m originally from South Pacific island of Tuvalu, and migrated to New Zealand when I was five.

Polynesian culture is something I’m very proud of. Polynesians have a very soulful and humbling sincerity about them. When Polynesians gather together, there is always laughter provoked by dancing, singing, and the sharing of stories.

The aboriginal people of Taiwan speak 26 different Austronesian languages, although only 16 ethnic groups have been officially recognised by the government. They have linguistic and genetic ties to the people of mainland Southeast Asia, Polynesians, and Chinese.

I discovered four similarities that indigenous Taiwanese have with Polynesians, including New Zealand’s Maori people:

A language that shares similarities with my own Tuvaluan language is that of Taiwan’s Puyuma tribe. With the exception of one, four, and six, all Puyuma numbers were very similar to Tuvaluan and Maori. Here is a table of these numbers below to show the similarities.

The traditional costumes and colours the Puyuma tribe wear are also quite similar to my Tuvaluan culture. We both wear Fou’s (a garland made from leaves and flowers to decorate the head) during celebrations.

Another similarity is how the aboriginal people of New Zealand tattoo their faces just like Taiwan’s Atayal tribe.

Atayal people typically have to earn their tattoos. Both cultures tattoo their faces as an expression of one’s identity and pride in their achievements. 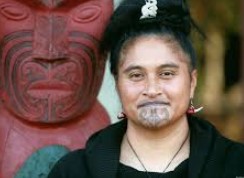 In Keelung, there is an Indigenous Cultural Centre for locals and visitors to Keelung to learn more.

Are my Ancestors from Taiwan?

Not everything about the two cultures and customs are the same, but there are similarities.

Taiwanese people are a charming, passionate, and very generous people. There is much that ties our two cultures together.

Follow Aimee Alefaio:
Polyasianz Travel We are a travelling family from NZ travelling and volunteering around the world for over 2 Years now to experience and learn about different cultures and lifestyles. Taking our kids back to simplicity