In an earlier article, I made a call for establishing a red light district in Keelung. Controversial as it sounds, I believe that Keelung City has the potential to be the Times Square of Taiwan — provided the city is willing, and able, to overcome its taboos and culture of conservatism.

During the 1970s and 1980s, New York's Times Square was the site of pornography and crime, with street hustlers and gangsters a common sight on the streets. And yet by the 1990s, Times Square, under Mayor Rudolph Giuliani, transformed itself into a popular tourist destination.

Key to this was by turning existing — albeit failing — industries into tourist attractions. In the early 20th century, Times Square held some of the city's most popular theatres and restaurants, and even incorporated gang culture into its image. In the 1990s, Times Square officials injected new life into these defunct businesses, rapidly driving up interest for foreign travelers.[1]

Keelung City has the same potential. In the early 20th century, cheap labor and prostitution were widespread under Japanese colonial rule.[2] This led to a significant rise in wealth as foreigners poured into the city. Keelung today can legalize prostitution under the revised Social Order and Maintenance Act and similarly take advantage of the already existing red light district.[3] The red light district merely needs to be acknowledged. 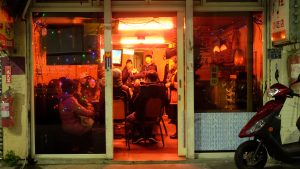 Keelung For A Walk held the red-light district tour taking the guests to understand its history and culture. photo by: Kevin RU

Of course, I am not endorsing the exploitation of vulnerable women. Rather, I would like to demonstrate the potential of prostitution to better Keelung’s economy and open more job opportunities for those without alternatives.

And as with all views, there are detractors. For Police Officer Yu, its people’s mentality itself is a stumbling block. Keelungers are not used to change, he feels, having promoted its image as a port city since the Ming Dynasty.[8] Many of its residents hold on to traditional beliefs, including their views on sex. Legalizing prostitution would not be as easy as bringing in major businesses like Disney to a deficient city.

Keelung City is now moving towards a more open environment with a new party government. Increasing the economic power of its shipping container ports and fishing industry has not worked.[4] The tourist industry is gaining dominance over traditional businesses, attracting over 5,000 foreign visitors in 2016.[5] This means that nearly 1.3% of Keelung’s population at any given time consists of tourists.[6] Foreign visitors, excluding Mainland Chinese, increased by 20% in the last year.[7]

Perhaps the question to be asked is: can Keelung City still afford to hold on to its conservatism? During the 1970s and 1980s, Times Square was the site of pornography and crime, street hustlers and gangsters alike running amok. Murders were frequent and the police force often had little resources to combat the growing crime rate, many dying in action or retiring early.[1]  Additionally, the economic status of New York City in general faced crippling debt that was only minorly aided by a federal bailout.[2] In effect, Times Square was the premier red light district of New York City at this time.

In the 1990s, a significant change was made — businesses began moving in, including the Walt Disney Company in 1994.[3]  Immigrants surged into the city, swelling from a population of seven million to eight million in a few short years.[4] The police force began reclaiming its territory from crooks, new police commissioner Bill Brooks in charge paving the way for cleaner, safer streets.[5] Within a decade, Times Square was transformed from a red light district to a popular tourist destination.

Join us to discover many more hidden places in Keelung on our Cultural Adventure Tour!