The Taiwan street food scene is a wonderland filled with delicious and affordable food treats that every traveler should try. They offer insight into Taiwan’s checkered history showcasing food influences from China, Hong Kong, Japan, and even France. Around every street corner in Taiwan, you will find families, friends talking, laughing and sharing street food together. Keelung’s Night Market Miaokou is a local favorite hangout and famous for having excellent seafood, an electric atmosphere and of course delicious street food.

In addition to the food coma-inducing Miaokou Night Market, there are many other street food options in different corners of Keelung. Walking down memory lane, a Japanese dessert comes to mind, one inherited during the Japanese occupation. As a little child, I was always lying on a glass cabinet watching the different treats in front of me: dorayaki, adzuki jelly, and mochi.

Let’s see how many coins I have in my pocket.

Dorayaki is an iconic Taiwanese dessert that brings back fond memories for many locals. It is a palm-sized treat made from two sweet pancakes sandwiched together, traditionally with a red bean filling. Nowadays, there are many creative fillings available including cream, chocolate, sweet potato, and chestnut. 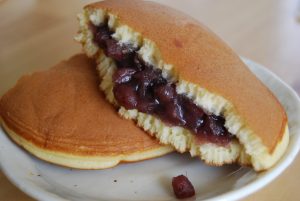 The treat originates from ancient Japanese times, having been traced back to the Edo Period (1603-1867). The name “dorayaki” comes from the Japanese word for “gong”: dora. Well, if you use your imagination, the treat does seem to resemble a miniature gong in shape (although I would not recommend banging on it).

Dorayaki has also featured in modern culture. It is famous for being the favorite snack for Doraemon, a blue robotic cat anime/manga character that was very popular in many Asian countries in the 70s to the 90s.

In 2016, this treat again took center stage: in the Japanese movie ‘Sweet Bean‘. This tender drama tells the story of a Dorayaki shop and three lonely souls whose lives have been connected together by the sweet bean treat.

I invite you to try Dorayaki and take a trip down memory lane. Have a bite and think back about the connections and memories that have been made in history through something as small and humble as this Japanese pancake sandwich.

Among all the Taiwan street food, the cutest treat is likely the “Chinese bulbul,” named after one of Taiwan’s “Endemic Species.” 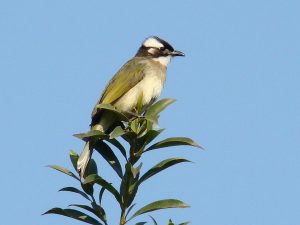 It’s made by smashing sweet red beans and covering them with white sugar. The direct translation of its name is “white-head bird,” and that’s what this dessert looks like, right? It can be purchased for 20 NTD, or around 0.65 USD. There are many more creative and affordable treats to try in Taiwan. Go on your own food adventure now and visit a local Taiwan street food store. All you need is some loose change and an adventurous spirit!